Time and Again... why time travel intrigues us 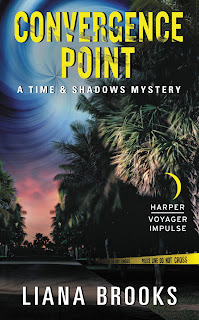 It's fitting that the day CONVERGENCE POINT released noted physicist Dr. Michio Kaku shared a video about déjà vu and the multiverse. He talks about multiverses being in phase... convergence points of time. Even science can't let go of the theory that there could be more than one reality, more than one iteration of time.

And, if there are other timelines, wouldn't the most natural thing in the world be the quest to cross between them?

Human beings are explorers. We can't look at a sea without wanting cross it. We can't see a star and not reach for it. It's not in our genes to sit still.

Part of this quest for time travel is driven by doubt. We want to believe we did the right thing, made the best choice, and here is the multiverse whispering seductively, "Come and see what would have happened if..."

We've hundreds of books, and dozens of movies all focused on this idea. WHAT WOULD HAVE HAPPENED IF YOU MADE A DIFFERENT CHOICE?

Time travel is terrifying for the exactly the same reason. What if a different choice would have been better? Sometimes we just want to pretend that our choices are meaningless - everything is fate - because it means we aren't responsible for what happened.

We were innocent bystanders. Flotsam in the stream of time. Victims of circumstance... It's a thought process that makes dealing with choices so much easier.

That's why we can't stop poking at the idea. We all want to know what would happen IF. We all want that sneak peek, or a chance to right a wrong, or the chance to "make everything right" even though no one can agree on what RIGHT is.

In CONVERGENCE POINT I play with the idea of three intersecting timelines that cross, warping each other and change their futures in the process. The main character has to struggle with what to do when she finds a killer who has traveled back in time to before he makes his first kill.

We love to hear from you! Comments must pass moderation to be published. Spam will be deleted.